Home > Books > The Scoundrel Who Loved Me

The Scoundrel Who Loved Me 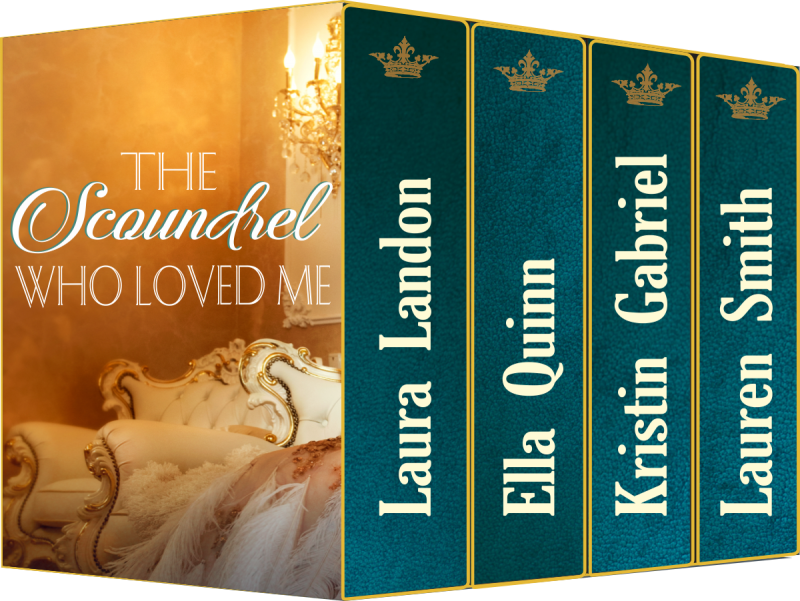 A Persian princess and three English beauties cavort through these novellas, taming four scoundrels of differing shades of arrogance and pride. And all — scoundrel and damsel alike — are about to lose their hearts in the most enticing, unexpected, blindingly stubborn ways.

HIS WICKED EMBRACE
by USAToday Bestselling Author Lauren Smith
A kidnapped Persian princess was the last thing he expected to find when Lawrence Russell went under cover for the Bow Street Runners. But with one look at her terrified eyes, he knew he had to save her. And in doing so, he knew she’d made of him a better man. Still in danger of being discovered by her obsessed captor, the half-English princess Lady Zehra is left with only one request of her handsome savior. “Take me to bed. I wish to see the stars again.”

THE SECRET SCOUNDREL
by Kristin Gabriel, two-time Rita winner and author of the Harlequin book made into the television movie Recipe for Revenge
One stolen vase, two captured hearts.
Miss Diana Harwood was too tall to gain a fellow’s interest, and Colin Sinclair, Marquess of Thorne and Viscount Thorne, was too much of a rogue to tempt any clear-thinking maiden. But when neither can manage to win the upper hand, their only recourse is to collaborate in finding the priceless Chinese vase Thorne was hired to recover…and leave their hearts perilously unguarded.

ONE DUKE OR ANOTHER
Book Three of The Trevors
by USAToday Bestselling author Ella Quinn
She was perfect for him. Now all Guy Paulet, heir to the Bolton dukedom, had to do was convince Lady Aglaia to jilt his uncle, defy her father, and marry him in less than a month. After all, she absolutely could not be allowed to marry a man who had murdered his four previous wives.

A SCOUNDREL AT HEART
Book Five of Ransomed Jewels
by Amazon bestselling author Laura Landon
He was blind to love. The fire that had left Lord Thomas Renfrew terribly disfigured had seen to that. Even when faced with the heart-shattering love offered by the beautiful Lady Cleora, he couldn’t see a way to unleash the passion that filled him in her presence. Until she was freed from her own prison, and took him into her heart—scars and all.

Share
Facebook Twitter Google+
Preview
Disclosure of Material Connection: Some of the links in the page above are "affiliate links." This means if you click on the link and purchase the item, I will receive an affiliate commission. I am disclosing this in accordance with the Federal Trade Commission's 16 CFR, Part 255: "Guides Concerning the Use of Endorsements and Testimonials in Advertising."